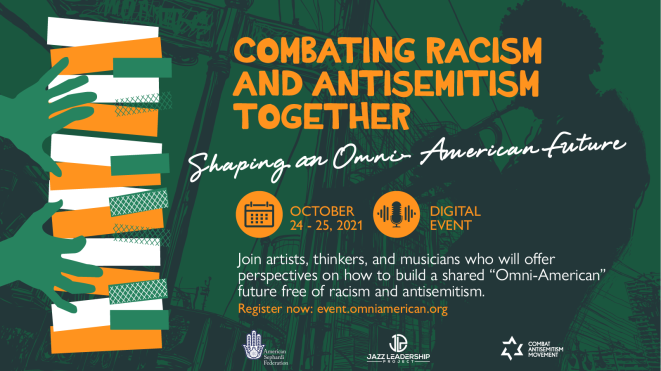 The Institute for Cultural Evolution is a partner in the Shaping An Omni-American Future online event taking place on October 24th and 25th. This event is being put on by the American Sephardi Federation, the Jazz Leadership Project, and the Combat Antisemitism Movement, and is going to feature artists and thinkers who are inspired to create a more unitive approach to anti-racism based on the teachings of Albert Murray and Ralph Ellison.

New Course From Our Partners: Stepping Up

By Institute for Cultural Evolution

Join Jeff Salzman Live for the First “This Week in the New York Times” This Friday, July 30th at 11am MT!

The Atlantic Magazine recently published a powerful and timely article by journalist George Packer. Entitled “How America Fractured Into Four Parts,” the article is adapted from Packer’s just-released book, Last Best Hope—America in Crisis and Renewal. Packer reaches many of the same conclusions about the current state of American culture that the Institute for Cultural Evolution has been describing for the last five years.

Why I Am a Radical Moderate

In today’s polarized climate, being moderate has become a radical position

In June 2020, after the horrific murder of George Floyd, a crime for which justice rolled down like a mighty stream in a three-count guilty verdict against former police officer Derek Chauvin recently, I wrote the following on my Tune In To Leadership blog:

I feel called to add my voice and perspective based on decades of study and conversations with thoughtful people about race, culture, identity, and wisdom tools to unlock the gordian knot of race and racialist thinking. Such thinking becomes values and behavior inimical to not only black folk, but to the cultural, civic, and civil advance of American civilization—period.

As a Black American citizen, and as a writer-intellectual-entrepreneur, I embrace the ancestral imperative to envision a future where the better angels of our nature overcome the bedeviling human capacity for evil and sociopathic lack of empathy. Such a vision, and the attendant strategies to enact them, are my focus and intent.

The following essay frames my contribution, as a Senior Fellow of the Institute for Cultural Evolution, to the launch of The Post-Progressive Post.

When did the anthems of self-acceptance become the soundtracks of insurrection?

It was a disturbing moment. There I was, all ready to sweat it out on my pandemic Peloton, and to take a break from the political crisis of the moment—the storming of the Capitol by protestors seeking to keep the election from being certified. The music I chose to ride along to on this particular day was the soundtrack to The Greatest Showman. Corny, you might say. But hey, that’s me. I have a huge soft spot for musicals and that’s a damn good one. And the beats of that soundtrack make a great rhythm for spinning.

Progressive Inclusivity Is Not Inclusive Enough

Toward an Omni-Inclusive Post-Progressive Vision

One of the hallmarks of the post-progressive approach to politics and culture is what we are calling omni-inclusivity. Omni-inclusivity is best understood in the context of America’s evolving scope of inclusivity throughout its history. A fairly obvious feature of American history has been its steady, but often painfully slow expansion of the scope of pluralistic inclusion. While it is true to say that we are a country founded on ideals of equality that we have never actually lived up to, it is also true to say that the American experiment has been an exercise in trying to make those founding ideals more true with each generation.

Why We Will Grow Together or Grow Apart

The lion’s share of attention in climate discourse is devoted to the “hard” side of the problem: the needed STEM solutions. But solving the hard side is not sufficient. While political will is not a “hard” problem, in the United States it is proving to be the hardest problem of all. Thanks to social scientific research, we now know a lot about how psychology and culture shape people’s views around climate change, in particular that the “information deficit model”—exposing climate skeptics and deniers to scientific evidence—doesn’t work

The process of liberation is a movement toward greater diversity, interiority, and communion. At the social level, liberation celebrates differences and dialogue while renouncing monoculture. Liberation’s method recognizes spirituality and relationality, both of which can deepen through humanity’s conscious participation. Today, we see the liberation process in movements for social justice, animal rights, and climate activism, among others. In this article, I interpret Martin Luther King Jr.’s worldview and influence during the 1960s through the lens of integral philosophy, as recently expanded by the new political philosophy of post-progressivism. I critically examine how King’s example can inform cultural intelligence in liberation activism today.